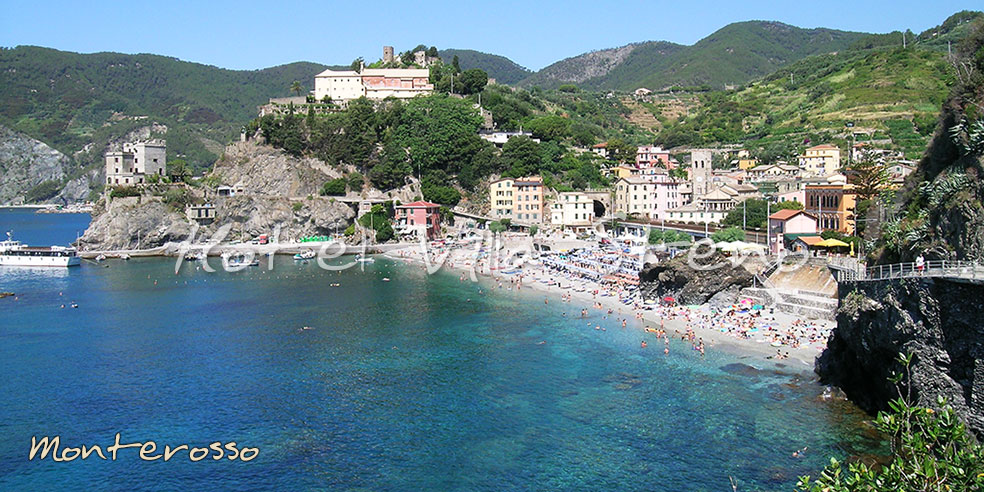 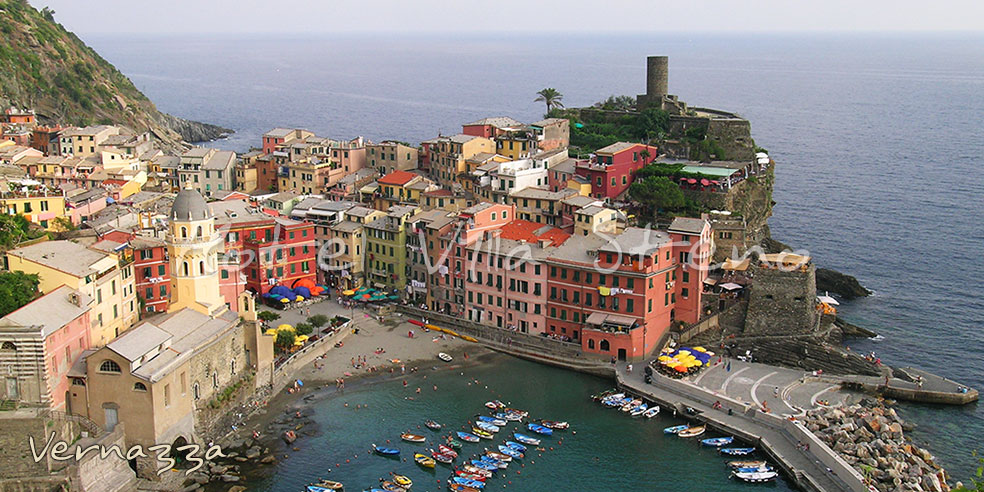 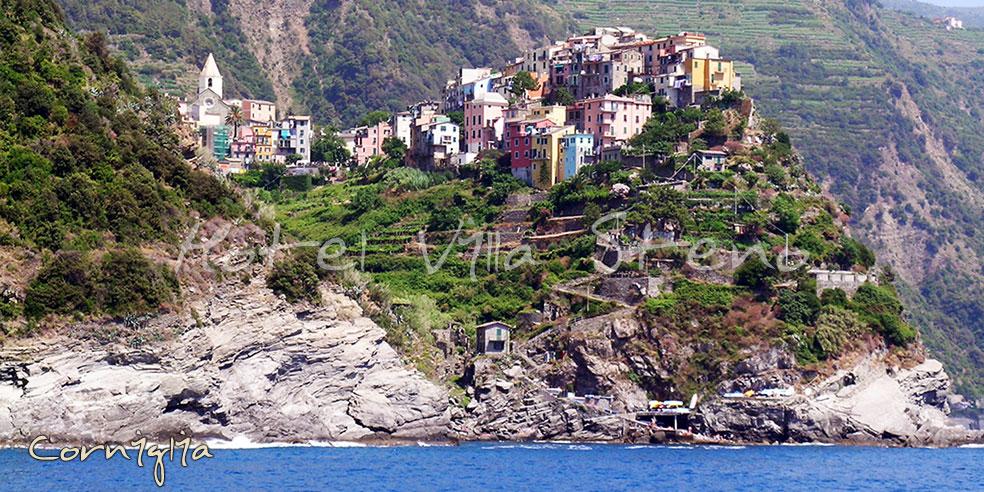 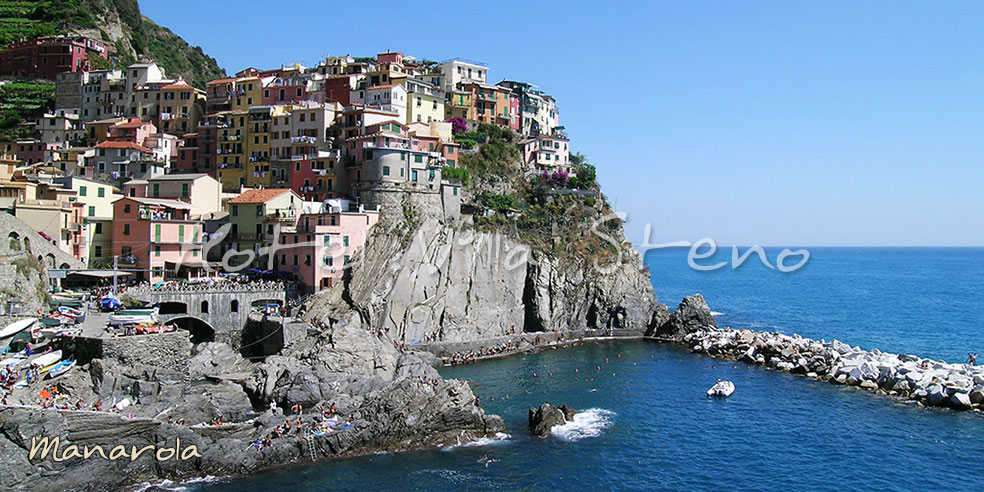 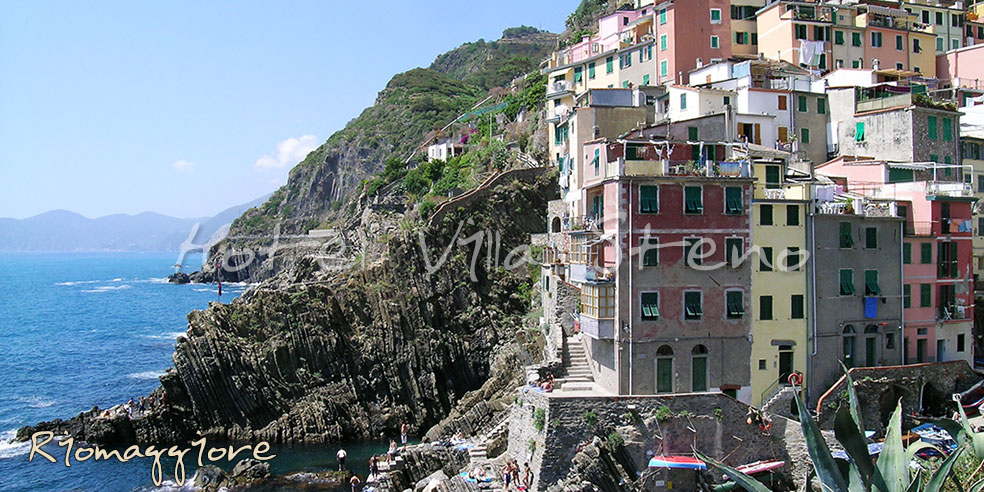 Gorgeous beaches, crystal-clear water, steep trails winding through lush vineyards and olive groves, lemon trees and pine woods: a perfect spot, whether you enjoy swimming, boating, walking through the historic town, or exploring the pristine nature all around you.

Cinque Terre is one of the few places in the world that is protected as both a National Marine Sanctuary, safeguarding the sea and its resources, and a National Park, preserving a landscape crisscrossed by mortarless stone walls that have been built and tended over the centuries with enormous effort.

Monterosso is the only village in the Cinque Terre with its own large beach and a seafront promenade, which connects the traditional houses and alleyways ("carruggi") in the historic part of town, to the new residential neighbourhood of Fegina. The town traces its origins back to 629, when hilltop populations, fleeing the devastation left in the wake of the barbarian invader Rothari, settled by the sea on San Cristoforo hill, where the ruins of a fortress (now the town cemetery) bear witness to this early settlement. The name probably derives from this hill's reddish soil.

Sights
Torre Aurora ("the tower of dawn", 16th century), the tallest watchtower that has survived in Monterosso, built by the Republic of Genoa to defend it from attack by Saracen pirates, looms over the medieval town's harbour.
The Castello, an ancient fortress on a sheer cliff overhanging the sea, has left impressive ruins far above the historic part of town. It is now the town cemetery.
The Church of San Francesco, a Capuchin monastery built in the 17th century, houses noteworthy artwork, including a Crucifixion attributed to Van Dyck.
Villa Montale, built in the early 20th century, is where Eugenio Montale (who won the Nobel Prize for literature in 1975) wrote some of his greatest poems.

Trivia
In the past, the town of Monterosso possessed a large "tonnara" (a traditional system of fixed nets) that made it famous for its salted anchovies and for scabeccio, fried fish preserved in vinegar in wooden barrels.

Standing at the mouth of a creek, Vernazza grew up as a natural harbour that for centuries was the only safe point giving access to the sea in the Cinque Terre; its name, in fact, seems to derive from the Latin word hibernacula, or "maritime port".

Sights
The Doria Castle is a cluster of fortifications, towers, and walls that offers visitors a panoramic view of unsurpassed beauty.
The Church of Santa Margherita d'Antiochia is in classic Ligurian Gothic style; construction began in 1318.

Trivia
Over the centuries, Vernazza has enjoyed great political and economic importance, as can be seen from the architectural style of its houses and the loggias and porticos that adorn its streets.

Corniglia is the only village in the Cinque Terre that is not by the sea; rather, it is perched on a rocky promontory 90 meters up, and must be reached by climbing the 377 steps of the "Lardarina", a long brick stairway. Its origins date back to Roman times, and its name seems to derive from one of the settlers who divided up the territory after the Roman victory over Hannibal (77 BC).

Sights
The Church of San Pietro, built in 1334, is one of the most intriguing monuments in the Cinque Terre, because it shows a very unusual juxtaposition of styles: simple Ligurian Gothic and ornate Baroque.
The Oratorio dei Disciplinati di Santa Caterina, dating back to the 18th century, is a marvellous panoramic lookout point.

Trivia
The town structure in Corniglia is different from the other villages: the houses are lower, and have only recently been built with multiple stories, much like towns further inland.

Famous for its enchanting "Via dell'Amore", the trail linking it to Riomaggiore, the town of Manarola is perched on a high dark outcropping. It is the oldest village in the Cinque Terre, and its name seems to derive from the Latin "Manium arula", a temple dedicated to the gods of the underworld.

Sights
The Church of San Lorenzo, also dedicated to the Nativity of the Virgin Mary, was built in 1338 in classic Ligurian Gothic style: simple, austere, yet lovely.
Above the town is the Sanctuary of Nostra Signora della Salute, dating to about the 10th century.
You can enjoy a breathtaking view of Ligurian houses from the Palaedo marina and of the Cinque Terre coastline from Punta Bonfiglio.
The Via dell'Amore leads to Riomaggiore.

Trivia
Rising over the traditional slate roofs of the old town is an unusual pyramid made of white cement, used as a navigational reference point.

The easternmost village of the Cinque Terre clings to the steep valley walls of the creek from which it took its name (now underground). Legend has it that it was founded by a group of Greek refugees around the 8th century. This is the starting point for the romantic Via dell'Amore, a path cut into the rock that leads to Manarola.

Sights
From the Cerricò Castle, a fortress dating back to the 13th century that still towers over Riomaggiore, you can enjoy a fabulous view overlooking the sea.
The small Cappella dei Santi Rocco e Sebastiano was built to commemorate a terrible plague that struck the town in 1480.
The Church of San Giovanni Battista, dating back to 1340, still houses many valuable paintings and drawings.
The Via dell'Amore leads to Manarola.

Trivia
The "Macchiaiolo" painter Telemaco Signorini spent many periods of his life in Riomaggiore, lovingly immortalizing its inhabitants in his drawings, paintings, and writings.